Tanzania’s oldest and most popular National Park, also a World Heritage Site and recently proclaimed a 7th world wide wonder, the Serengeti is famed for its annual migration. Serengeti National Park is unquestionably the best-known wildlife national park in the world, unique for its natural beauty and scientific value. With more than two million Wildebeest, half a million Thomson’s Gazelle, and a quarter of a million Zebra, it has the greatest concentration of plains game in Africa. The Wildebeest and Zebra moreover form the star cast of a unique spectacular – the annual Serengeti migration.

Located in northwest of Arusha, lying in a high plateau between the Ngorongoro highlands, Kenya and Tanzania borders and extending almost to Lake Victoria to the West. There is a variety of scenery, which includes the plains, lakes, hills and the rocky outcrops called kopjes. Hot air balloon safaris, Maasai rock paintings, musical rocks and visit neighboring attractions; Ngorongoro Crater, Olduvai Gorge, Oldonyo Lengai volcano and Lake Natron’s flamingos.

A unique combination of diverse habitats enables it to support more than 30 species of large herbivores and nearly 500 species of birds. Its landscape, originally formed by volcanic activity, has been sculptured by the concerted action of wind, rain and sun. It now varies from open grass plains in the south, savannah with scattered acacia trees in the center, hilly, wooded grassland in the North, to extensive woodland and black clay plains to the West. Small rivers, lakes and swamps are scattered throughout. In the south-east rise the great volcanic massifs and craters of the Ngorongoro Highlands. Each area has its own particular atmosphere and wildlife.

The Park can be divided into 3 sections. The popular southern or central part (Seronera Valley), is what the Maasai called the “Serengit”, the land of endless plains. It’s classic savannah, dotted with acacias and filled with wildlife. The western corridor is marked by the Grumeti River, and has more forests and dense bush. The North, Lobo area, meets up with Kenya’s Masai Mara Reserve, is the least visited section. 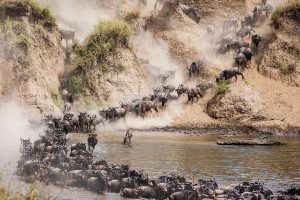 The Serengeti hosts the largest terrestrial mammal migration in the world, which helps secure it as one of the Seven Natural Wonders of Africa, and one of the ten natural travel wonders of the world. Each year around the same time the circular great Wildebeest migration begins in the Ngorongoro area of the Southern Serengeti of Tanzania. This migration is a natural phenomenon determined by the availability of grazing. It lasts from approximately January to March, when the calving season begins – a time when there is plenty of rain ripened grass available for the 750,000 Zebra that precede 1.2 million Wildebeest and the following hundreds of thousands of other plains game.